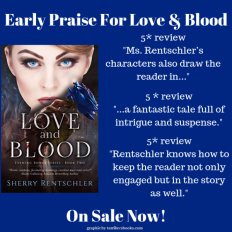 I’m so incredibly excited about for Sherry Rentschler​ second book in the Evening Bower Series. Her second book is called Love and Blood. Check out the blurb!

BOOK BLURB for LOVE AND BLOOD

When Rhea and Amor-el defeated the vampire horde, they thought they won.

When Rhea birthed Destin, the miracle son, they thought they fulfilled an ancient prophecy.

When the blue roses bloomed, they thought they achieved a long-denied bliss.

Now, the blue roses are dying. A tarot card reading warns of impending dangers and an impossible future. In this gripping sequel to the bestselling Time and Blood, a strangely ailing Rhea, a desperate Amor-el, and a jealous Destin must confront familiar enemies banding together against Rhea and her bower family. These powerful adversaries plan to kill the phoenix, her lover, and her son; steal The Great Book of Forgetting, and end the prophecy.

When arson and murder strike too close to friends, they question loyalties and deny love when they need it most. Blood stains the bower.

To protect her family and the prophecy Rhea makes the ultimate sacrifice. After all, in the battle between love and blood, blood never lies.

Her decision will change the bower – and her – forever.