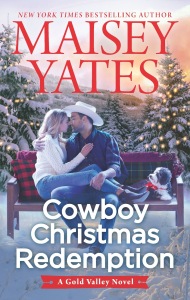 
As snowflakes fall in Gold Valley, Oregon, will this rugged cowboy finally win the woman of his dreams?

Cowboy Caleb Dalton has loved single mom Ellie Bell, and her little daughter, Amelia, for years. But since Ellie is his best friend’s widow, Caleb’s head knows Ellie will always be strictly off-limits. If only his heart got the memo. So when Caleb discovers that Ellie has a Christmas wish list—and hopes for a kiss under the mistletoe—he’s throwing his cowboy hat into the ring. If anyone’s going to be kissing Ellie and sharing this magical time with her and her daughter, it’s him.

Ellie has dreaded the holidays since losing her husband. But this year, she’s finally ready to make some changes. She never expects the biggest change to be the heart-stopping kiss she shares with Caleb. For almost five years, Caleb has been her best friend, her rock, her salvation. This Christmas, can Caleb prove he’s also the missing puzzle piece of Ellie’s and Amelia’s hearts? 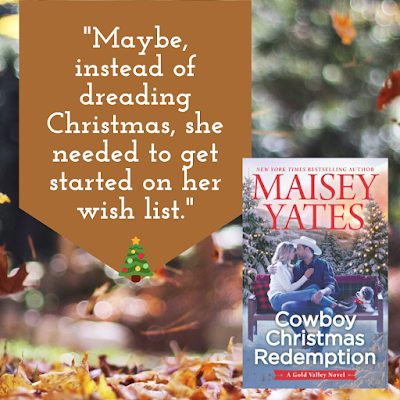 “But you are… You’re going to run a Christmas tree farm?”
“At least temporarily. Everything’s ready to go now, which means finishing out the year, or the next few years, is guaranteed money in the bank to begin other ventures. There’s contracts already made with outfits around the country, truckers on hand to drive the things to their destinations. And he owns that small lot down on the main street of town. So, I’m all set not only to sell this year’s crop around the country, but also sell it here.”
“But you don’t… You don’t actually want to…be a Christmas tree farmer?”
“My ultimate goal is cattle,” he said.
She’d had no idea. None at all. Not that he wanted his own ranch, not that he’d been unhappy at the school. Was he unhappy at the school? Was he leaving?
“What does this mean for your position at the school?”
“I will be leaving. Which I will be talking to Gabe about later tonight.”
“But…”
“With West Caldwell coming into town, there’s no need for me to hang around. He’s going to be working on the ranch.”
“Your half brother that you’ve never met. That’s put­ting a lot of stock in a man you don’t even know.”
“Gabe figures we owe him. And, since Gabe is awash in guilt over the whole half sibling thing, I fig­ure that works in my favor.”
As much as Ellie loved Hank Dalton, the patriarch of the Dalton clan, it was becoming more and more clear that he was problematic. A couple of years ago it had been discovered that he had a daughter that none of them had known about. McKenna Tate. She’d come into town after discovering the identity of her family, and after some adjusting, the Dalton family had wel­comed her into the full. But on the heels of that revela­tion had come another one.
There were three more children. All adults now.
Hank had never known about them. But Tammy had.
It had changed the relationship, that reveal.
But Hank was awash enough in the guilt from the actions in his past, that the two of them were trying to work through it to an extent. And Ellie really hoped that they did. For some selfish reasons, if she was honest. Because she loved them, and they were the closest thing to a family for her, and she didn’t want to lose them.
“But… Don’t you want to wait and see if it’s going to work out?”
“No,” Caleb said. “I don’t want to work at the school forever. This is what I want.”
That made her…angry and she couldn’t figure out exactly why. He deserved to have dreams; of course he did. But she’d just…assumed he was happy with the way things were. She’d somehow meshed his dreams together with hers.
Had decided that what she was doing with his fam­ily ranch, with the school, was what he wanted, too.
But if she didn’t feel great about him fighting fires anymore, maybe he didn’t, either. And she’d never asked. She’d only thought about it in terms of her own comfort. That wasn’t right at all.
Still, the idea of him having his own endeavors, his own life farther away from her and not right all around her while they worked…
She needed him. She really had. She still did.
She didn’t like this…this change. But she should be happy for him, and it made her feel… She felt bad. And she didn’t like feeling bad about something that was good for her friend.
“I’d… Well, congratulations,” she said. Even though she didn’t feel like congratulating him at all. She felt like having a tantrum.
She really didn’t know why.
“Thank you,” he said, his mouth quirking up into a half smile that made it very clear he was well aware she wasn’t having the best reaction to his news.
“I’ll miss seeing you.” The words more plaintive than she intended.
“I’m not moving away,” he said.
“Yeah, but I see you all the time,” she protested.
“You will still see me all the time.”
“But you won’t be dropping Amelia off when I want you to.”
“Probably not.”
Her stomach twisted, but that wasn’t what was up­setting her. She knew it wasn’t.
And then it hit her, as strongly as that melancholy had when she’d realized it was nearly the Christmas season.
This phase of life was over.
The one where he was here to carry her. Where she had a crutch to get her through what life looked like without Clint. Being a single mother.
It was changing.
It had begun to change months ago, when the idea for the school had come about. She had gone back to work.
But she’d been a fledgling, and he’d been there to help her.
Maybe she needed to make some changes, too.
Maybe, instead of dreading Christmas, she needed to get started on her wish list. 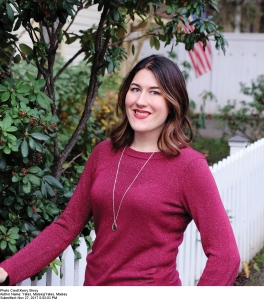 USA TODAY Bestselling author Maisey Yates lives in rural Oregon with her three children and her husband, whose chiseled jaw and arresting features continue to make her swoon. She feels the epic trek she takes several times a day from her office to her coffee maker is a true example of her pioneer spirit.

There was an error retrieving images from Instagram. An attempt will be remade in a few minutes.