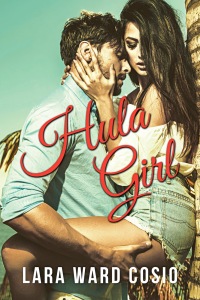 What happens in Maui, stays in Maui. Unless you run into your vacation fling back home.

Much to her annoyance, workaholic lawyer Ava Ruiz is forced to take a vacation to a tropical paradise. Unable to tear her mind off her cases, she’s counting down the days until she can go back to work.

Until she meets Ford.

Admittedly, she has nothing in common with the gorgeous surfer. She’s type-A and he’s the definition of laid-back. But for a few steamy days, that fails to matter thanks to their instant and undeniable attraction.

Inevitably, all good things must come to an end . . . or do they?

Once back to their “real world” lives, Ava and Ford come face-to-face in a surprise reunion that takes a turn when he asks her to help him out by playing along with a fake engagement. Reluctantly going along with the ruse, Ava soon finds herself wondering if either of them are pretending, after all.

Fans of sizzling vacation romance will find themselves swooning over Hula Girl! 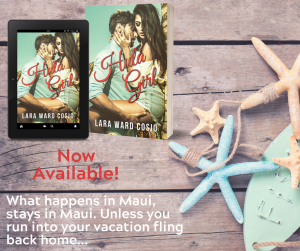 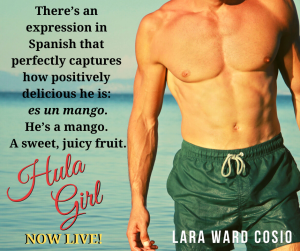 I have no desire to get involved with another lawyer, not after the disappointment that was my ex Bryce.
Speaking of whom … here he comes, making a beeline for me. I have no choice but to stand still and await him, as I’ve already made accidental eye contact.
“Ava,” he says, his slightly gravelly voice revealing that he’s had a few cocktails already.
He leans in and I give him my cheek to kiss, but at the last second, he plants his lips against mine sloppily. I pull away and wipe at my mouth, glaring at him.
“Oops,” he says.
“Not cute,” I tell him and he shrugs. “Neither was that move you tried with my client while I was away. Good thing my firm had it covered and you didn’t succeed.”
He had tried to approach my client directly, without involving me or my firm. That’s a big no-no and he should know better. Other than pure hubris, I don’t know why he tried it.
“Where were you, anyway?” he asks.
“On vacation.”
He laughs. “No, seriously. Was it that conference in Boston?”
“No, I was actually on vacation. I completely disconnected.”
Eyeing me skeptically for a moment, he finally nods sagely. “Yeah, sure. Okay, if you don’t want to share, I guess I can live with the mystery.”
“You need to recuse yourself from this case,” I tell him, preferring to get back to business. That’s the only relationship we have left, at least in my mind.
“What? Why would I do that?”
“You were only supposed to be temporarily filling in for Polanski when he was out sick. Why are you sticking with this? Just to mess with me?”
He smiles and steps closer to me. “I’d love to mess with you again, it’s true.”
“Ugh.” I put my hand on his chest and push him back. “Your whiskey breath is not charming.”
“Ah, give me a chance,” he says, reaching out for me.
I step back just as I feel someone else’s hand circle my waist from my right side.
“There you are, honey.”
What I see makes me catch my breath.
It’s Ford.
My Ford.
Only, he doesn’t look the same. His normally tousled hair has been trimmed and is tamed into a neat style. His scruffy face has been cleanly shaven. And his usual board shorts have been replaced by a finely tailored gray suit, light-blue dress shirt, and no tie. He smells the same, though. God, he smells so good. It’s some sort of sandalwood, salty, beachy scent.
Before I can ask what he’s doing here, he offers his hand to Bryce, saying, “I don’t think we’ve met. I’m Ava’s fiancé.”
I open my mouth to dispute this surreal notion but stop when I feel Ford’s fingers squeezing my waist.
“Fiancé?” Bryce repeats dubiously. His eyes fall to my left hand. My bare left hand.
“The ring is getting sized,” Ford explains smoothly. “We should have it back in no time, shouldn’t we, Ava?”
“Um, well,” I mumble, trying to sort out just what the hell is happening.
“Wait a second,” Bryce says. “Let me get this straight, Ava. You, of all people, are getting married? And it’s to the Boy Wonder, Ford McAvoy?” He laughs, clearly finding the whole thing preposterous.
That’s exactly what it is. Still, I’m irritated that’s what he thinks.
Before I get a chance to say anything, Ford leans in close to Bryce, telling him with absolute confidence, “Ain’t nothing boy about me, old man. Now, why don’t you go ahead and get yourself another drink? You’ll need it for when it really hits you that Ava walked away from your ass.”
My hand flies to my mouth as I fail to suppress a laugh at the expression on Bryce’s face. He’s shocked and angry at being talked to this way.
“Real mature,” Bryce sneers.
I catch Ford winking at Bryce before he turns us away and toward an empty cocktail table.
“Kiss me,” Ford says.
“What? No. I don’t even know what is—”
“Fine. Then, I’m going to kiss you. And it’s going to be a real kiss. Slow, deep, and leaving you wanting more. Both because I want to—so fucking much—and because your ex is still watching us.”
“Oh,” I say on a sigh, powerless to refuse him when he puts it like that. I raise myself to my tiptoes as he gathers me to him.
When he kisses me, I lose all sense of anything else. My body melts into his, just the way it had during our few days together in Maui—no doubt a perfect display of our desire and attraction to each other.
When we slowly, oh so slowly, pull apart, he caresses my cheek with his hand and stares into my eyes.
“I was desperate to see you again, but I never thought I’d find you here, Hula Girl,” he says softly, a smile tugging at the corner of his mouth. 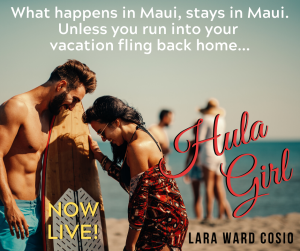