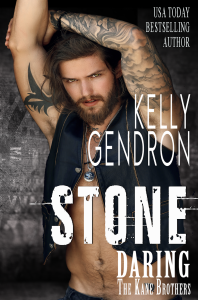 She’s waited a long time to confront me, and after one red-hot kiss, I wonder what’s going to happen when she realizes she can’t have what she wants

JAGGS showed up about a year ago. She’s feisty and difficult to ignore. She befriended my brother, and my family loves her. But the sexy spitfire hates me. She thinks I don’t know why she wants to destroy me or why she appeared out of nowhere, but I do

With his dark amber eyes and smooth whiskey voice, this drug-fueled rock star has somehow become my addiction

So what if he has a black belt in playing guitar, if he’s an Army vet who can deactivate bombs, or that he bubbles over with hotness? He’s the man who ruined my life, and no matter how tempting STONE KANE might be, I plan to crush him. 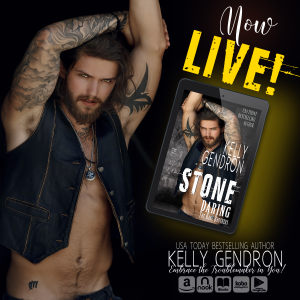 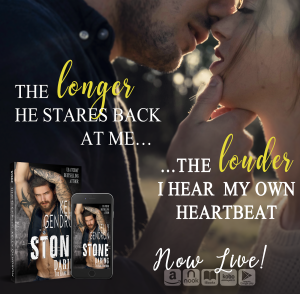 He stares at the Keurig for a long hard second.
“You know how to use it, right?” I snicker.
“Yeah.” He scowls at me. “Where’s those things?”
“Pods?”
“Yeah.” He half growls.
“Up in the cupboard.” I nudge in the direction. He continues to stare at me. And all I can think about is what he might have going on in those lounge pants. Dammit, why did he ask me if I was going to get in bed with him? As if!
The truth be told, it brought me back to the day in the storage room when he was screwing one of his groupies. It’s not like I haven’t imagined what sex might be with the philandering rock star. I just convinced myself it would suck.
He smiles at me as he had when he nearly pulled the sheets back.
Is he messing with me?
I know he hates me as much as I hate him. Is he trying to be lewd? Trying to turn me off or on? Neither will work as I only have one feeling for the man—hate.
Still, it’s strange. He’s never paid me any attention. He’s never struck up a conversation or looked at me for that matter. He usually acts as if I don’t exist. So what’s with the sexual advances and all the fake smiles this morning?
What’s going on here?
I watch him get the pod and prepare himself a cup of coffee.
He takes a sip. “Ah, that’s good,” he says in a low, sexy raspy voice. He takes another sip and another, then sets the mug down on the counter and turns to me. “Thanks for last night. I was really fucked up.” His tone more sober and sincere.
“Yeah.” I clear my throat, instructing my eyes not to look at his chest or anything else other than his face. “Like I said, I didn’t want to tell my best friend his brother died on my watch.”
He flicks his hair from his face. “Crash is your best friend?”
“Yeah.” It’s the truth. He’s one of my only friends. I haven’t been this close to anyone since Jenny was killed. Crash and his family mean a lot to me, so that must be why I didn’t let Stone die last night. It’s not like I don’t want him dead, but the second I got the opportunity to have what I want, I did everything in my power—which was grabbing a pillow and sleeping on the floor, so not much—to keep the asshole alive.
He takes a step toward me, bringing his hard-to-resist aroma closer to my nostrils. “You two ain’t sleeping together?”
“Not that it’s any of your business.” I set my mug on the counter, and he takes a step closer. My back straightens.
“No. I suppose it ain’t.” His eyes roam to my mouth, pausing for an unspoken salacious moment. “But I know what you want.”
Yeah, you dead. “What’s that?” I smirk, his eyes making it back to mine.
He smiles, reaches for his mug, and takes another sip of coffee. I shake my head, staying focused on his face. I wonder what he looks like beneath all that scruff and hair. His eyes, the color, it’s brighter, softer, and lighter than I thought, but like the smooth whiskey color, the effects are no doubt the same, and too much of those eyes could alter my thinking. And I’ve already concluded that I hate the way my body reacts around him.
He sets the mug down and takes another step toward me. His hand comes out. Not sure what he’s going after, I grab his wrist and squeeze hard.
“I was going to check your mug to see if you needed another cup,” he says with a husky chuckle. “Do I scare you?”
“Scare? No.” I release his wrist. “Repulse? Yes.”
He bends until our heads are level. I get another whiff of his fuck-me-hard scent that clings to him like sweat and sex. I’m quick to swallow down the unbridled desire attempting to stir in me. His eyes lower to my mouth, then slowly move back up. I watch, sensing an attack of some kind. He leans forward. “I’m going to kiss you… 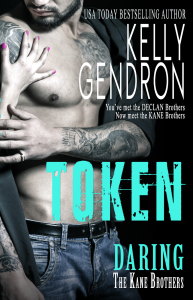 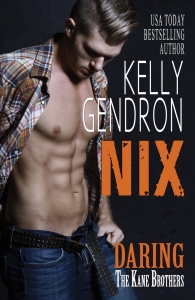 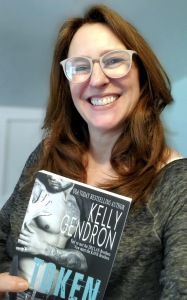 “Bad boys, give ’em a little time and experience, and they will evolve into misbehaving men!”

USA Today Bestselling Author, Kelly Gendron is best found tucked away in a quiet suburb in upstate NY writing her steamy, blush producing contemporary romances. But, when she’s not creating HEA stories, you may find her at her day job with her nursing cap on a little sideways. If you Google Kelly, she’ll pop up there as well. And please google her. Kelly loves to hear from her readers and to meet new people!