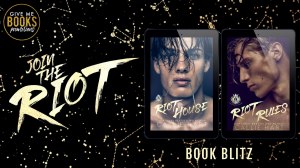 CARRIE
You think you know me, but you’re wrong.
You look at me and see Carrie, the girl with the wild hair and the wild clothes.
Reliable Carrie. Friendly. Quirky. Perhaps a little strange.
What do you really know about me, though?
The details of my past are up for debate.
I’ve been careful to hide my sins, and even more careful to follow the rules.
I do as I’m told. I keep to myself. I don’t mess around with boys, and I’m always ready to run.
At least that’s what I tell myself, anyway.
Since I met him, I’ve broken every single rule in the book.
He’s impossible. Arrogant. Terrifying.
If I’m not careful, Wolf Hall’s golden boy will do more than make me break the rules. He’ll wind up breaking me.
DASH
First, they hate me, then they hate themselves for wanting me. That’s how it always goes.
I’m the smart one. The charming one. The guy with the accent that makes girls go weak at the knees. As a resident of Riot House, I’m destined to rule Wolf Hall. Doesn’t matter where you come from. How much money you have. What your future holds. Cross the path of a Riot House Boy and you’re guaranteed to pay the price.
The girl isn’t special. She’s just another cog, turning in the wheel. So why, then, am I protecting her? And why am I keeping her a secret?
Call me a monster.
Call me a fiend.
Call me reprehensible.
Call me Lord Dashiell Lovett IV.
*Riot Rules is book two in the Crooked Sinners Series. It is a complete 145,000-word story that can be read as a standalone, or in conjunction with the other books in the series. 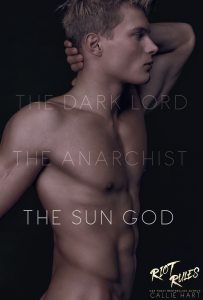 EXCERPT
Dashiell runs his hands through his hair, which is slightly drier than when he first entered my room but still wet enough for the strands to be clumped together. “What’s the alternative? Are we supposed to get to know each other? Share all of our deepest, darkest secrets? What, you wanna date me, Carina Mendoza?” He laughs coldly. “We’ve been through this. I’m not datable. I’m fuckable. I’m hate-able. I’m plenty of things…but you do not want to date me, Carrie. I can promise you that.”
“And you know me so well?” I’m stewing, alive with anger, my blood churning in my veins, hating the fact that there’s this sick, miserable feeling of disappointment welling in the pit of my stomach. He’s rejecting me all over again. “Don’t tell me what I want and I don’t want, asshole. You don’t know shit about me. If you’re not interested in me, then have the balls to say that and be clear instead of all of this dancing around, and side-stepping, and…and being so godddamn English.”
“Most people find my Englishness charming.”
“Well, I don’t. It’s annoying. You’re always skirting around whatever you want to say. You can never take a direct, straight line from point A to point B in a conversation—”
“Where’s the fun in straight lines?”
“—You have to meander and take the longest, most obscure route possible. And on top of all that, then you’re so unclear about your motives or goals that no one can ever get their head straight—”
“I can’t be direct like you people. I’ve tried. It causes me physical pain to be so abrupt. But fine. If you insist, I’ll give it a go.” He straightens, standing up tall, cracking his fingers as he stares down at me, his eyes full of ice-cold flames. “I’d fuck you, love. I would. But I’d probably never speak to you again. And you’d hate me. And I wouldn’t care, which would only make you hate me even more. Graduation will roll around, and I’ll make some kind of speech. You’ll sit there in your chair on the second-to-back row, and you’ll be filled with a burning hatred for me. And I…I won’t notice any of it. I won’t feel a fucking thing. I won’t care. It’ll be a miracle if I even remember you exist.
“Like I said. You’re better off forgetting all about me, love. Once I’ve made you come, I’ll move onto the next pretty girl with a decent sized rack, and that’ll be that. You won’t hear from me. There won’t be any texts. We won’t go skipping, hand-in-hand down the corridors of this dumpster fire. I’ll have ruined you. I’ll be this ugly sore of a memory, festering in the back of your mind, poisoning every future relationship you ever have because I made it impossible for you to trust men. Then, I’ll be back in England, sitting on my spoiled ass, re-reading the classics and fucking the housekeepers ’cause I’ve got nothing better to do. Not thinking about you…” He steps closer, reaching up, taking a piece of my loose hair, winding it thoughtfully around his finger. “Not remembering you. Not caring that I hurt you.” He pauses, and this is when I finally reach my lowest and my most despicable. Because his words hurt more than the sharp edge of a razor blade, but I’m still leaning into him. I’m still craving his touch. I’m still dizzy on his nearness, and the fact that I can smell the night and the rain on his warm skin, and no matter how hard I hate myself for it…I still fucking want him. 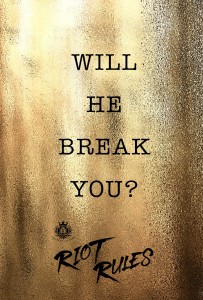 AUTHOR BIO
Callie Hart is a USA Today bestselling author of dark romance novels. She is an obsessive romantic who loves throwing a dark twist into her stories. Her characters are imperfect, flawed individuals who dictate when she eats, sleeps and breathes. She loves to travel, and often pens her books when she’s on the road, drawing inspiration from her often unique and wild surroundings.
If she’s not writing, you’ll undoubtedly find her with her nose buried deep in a book, or binge watching Game of Thrones.