Meet the Gods of the Fifth Floor. They work hard. They play hard. They f#ck harder.
Think Madmen meets Suits.

Beck
Money. Power. And as many women as I can shake my d*ck at.
Apparently I’m living the American dream.
In reality, I’m trapped in my worst nightmare.
And I can’t seem to wake up.
The ghosts of my past haunt my future.
The money. The hook-ups. The ad agency. The friends.
I’d give it all up in a heartbeat, for the one thing I want, but don’t have.
Her.

Mel
I’ve worked so hard and sacrificed so much to get where I am.
I should be proud of my achievements.
Instead, my success is marred by guilt.
It weighs heavy on my mind day and night.
My future is apparently bright.
Yet I can’t seem to shake the ghosts of my past.
Each day I remind myself what I have, and try to forget what I’ve lost.
Him. 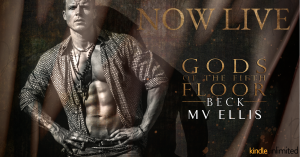 Motherfucker! I banged at my steering wheel before driving the heal of my palm on the horn, and holding it there for an extended time. Of course, my frustration wasn’t purely with the New York traffic. Though that was as fucked up as it ever was, getting stressed about it was a one-way ticket to executive burn-out, or a heart attack. Even then you’d probably end up stuck in traffic on your way to your own funeral.
No, the real source of my foul mood was a fiery girl with tawny skin, velvety dark eyes, and the best butt either side of the Hudson, who had left me with a raging hard on, wounded pride, and more questions than answers.

MV ELLIS knows what it’s like to fall head over heels in love with a badass musician. She followed her heart halfway around the world to be with one. She moved from London to Sydney after a steamy holiday romance with a sexy bass player in sultry Brazil.

Twelve years, two children and a dog later, and she’s still smitten. All this with a guy she sat next to on a bus for 36 hours! She has toured internationally as a “WAG,” and her experiences inspire her writing.

Ellis’s love of romance began when she was 11 years old, after a summer spent secretly reading her auntie’s books. She’s been a sucker for an alpha hero and strong heroine ever since.

An avid reader, Ellis always knew she’d write a book of her own one day. She was right about that. Following a career spanning advertising, marketing, and social media, she finally wrote her debut novel, Catching London in 2017. 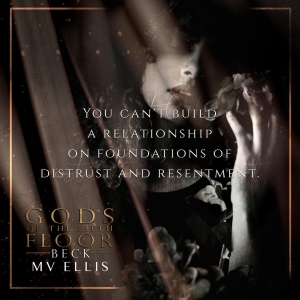